Last Tuesday marks the first anniversary of Hurricane Sandy. Sandy made landfall in New Jersey bringing 75 mile an hour sustained winds and gusts in excess of 90 miles an hour directly impacting Krohn Industries and its employees. The winds and flying debris damaged our roof, our exhaust hoods, windows and exterior doors. Rain water from the damaged roof flooded our offices and factory. We were without power for a week and phone service for ten days. And to add insult to injury later that night a levee broke along the Hackensack River allowing the eight foot storm surge to flood our area, block access roads and raise the rain waters to about 14 inches door to door within our building. It was two days before the roads were cleared of water, downed trees and power lines permitting access to the building, and the site was worse than expected.

My heart felt thanks go out to all of our loyal customers for their patience, well wishes, and understanding during this trying time.

We built the building in 1968 and have occupied the site since 1969. Never once was the building threatened by water. Yet fish lie dead in our parking lot and a neighbor even reported having rays and bluefish in flood pools behind his building. The walls and rugs were all damaged. Records, inventory, and packaging were destroyed. Production equipment and computers soaked with water, but due to the effort of our employees who reported to work in light of the damage to their homes, lack of electricity and 2 ½ hour gas lines, we began to dry thing out and salvage what we could. We were even able to, under the light produced by a portable generator, prepare, pack and FedEx an order of paste solder to a customer in need of product.

To their credit when the following Monday arrived with power we were able to bring the mills and other production equipment back on line one by one, and resumed shipping orders that very same day.

After a year, with the offices fully gutted and rebuilt and full production capability returned to the factory, I can proudly say we are back and stronger than ever.

Even though we survived and rebuilt, the storm killed 286 people, caused and estimated $68 billion in damages and affected 24 states. Unfortunately not everyone in our area has recovered as we have. Some have lost everything while others struggle to restore their lives to that they were like before the storm.

In an effort to help others affected by the storm, Krohn

Industries will donate a portion of November’s proceeds to sandynjrelief.org. 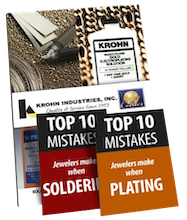 - Receive a digital copy of our catalog

You have Successfully Subscribed!

- Receive a digital copy of our catalog

You have Successfully Subscribed!